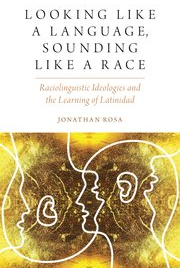 Rosa, J. (2017). Looking like a language, sounding like a race: Inequality and ingenuity in the learning of Latina/o identities. New York: Oxford University Press.

Languages are too big for academies to tame (Johnson), The Economist (March 14th 2019)

The man bringing dead langauges back to life (By Alex Rawlings, 22 March 2019 – BBC)

“Ghil’ad Zuckermann has found that resurrecting lost languages may bring many benefits to indigenous populations – with knock-on effects for their health and happiness.”

Fake accent? Ocasio-Cortez under fire from the right for how she says her own name (By Gwen Aviles, March 21, 2019 – NBC News)

“Meet Mexico’s Mayan Hip-Hop Artists” (Mexican rappers in the state of Quintana Roo are revitalizing their indigenous roots through rap, breathing new life into indigenous languages as they rhyme in their native tongue, Maya.) by Lauren Cocking

This entry is licensed under a Creative Commons Attribution-NonCommercial-ShareAlike 4.0 International license.