In class, we had the special honors of having two guest speakers to come to in and give a short seminar on how Hip-Hop relates to the language we use today. Throughout the duration of the class, we discussed how modern Hip-Hop has changed over the years and how it compares to the “Golden Era” of Hip-Hop to which people refer to as the mid to late ’90s of music. Collectively as a class majority agreed upon that the lyrics and messages of modern day Hip-Hop have become extremely demeaning and degrading to women, as well as promoting the use of drugs in all of their videos. Students in the class have mentioned that the lyrics in the “Golden Era” were more conscious and brought real-life issues to the table. As to modern day, rappers are barely understood in their music and mainly use sound effects within their music which we call ad-libs. We eventually see everyone’s view on Hip-Hop and how it has the power to affect the children of today. In the class discussion, one of the speakers made a valid point on how trying to understand the language rappers use in their music today can be compared to Shakespearian language while in middle school. I thought that was an interesting comparison to make only because both are technically considered a language, but what makes one more important than the other to teach in school curriculums? I just simply found her point of view in music very fascinating and it definitely gave me a new outlook on how language is used across various platforms.

I took this photo at my job, which is a school located in Brooklyn New York. within this school, there’s a large range of students who come from various backgrounds. With this sign being translated into different languages, it was created to send the importance to the students and their parents that the importance of healthy eating the actions that the school is willing to take and ensure the kids are properly fed by giving free lunches. 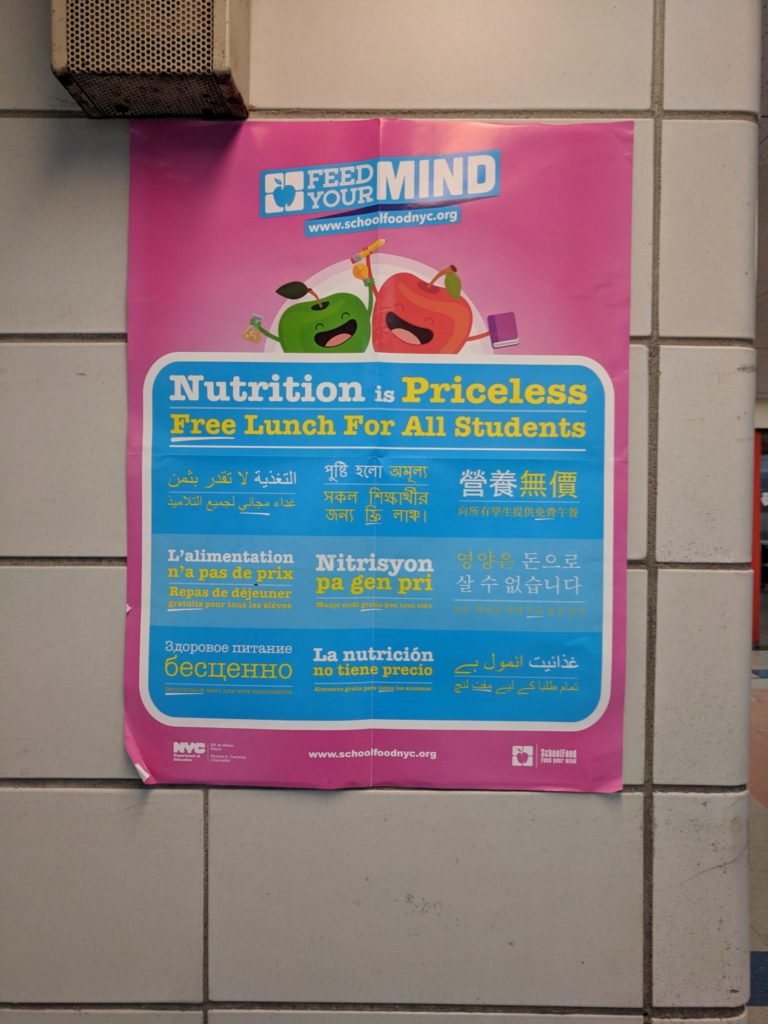 I speak only two different types of languages English and Creole.  I normally use both languages on a day to day basis whether it is at home, work, and sometimes even out in public. Growing up in Brooklyn and moving around a lot as a child I picked up on a few forms of dialect with certain people I’ve come across.  Coming from various different neighborhoods I would notice the sort of style people would use to talk amongst their peers and how people would communicate with one another. I have definitely picked up the various forms of dialect that I’ve come across up until my current age. I believe learning these forms of languages has aided me in being the social person that I am. They have also aided me in being more open and understanding when it comes to things that transpire in my life.