The experience I had at jackson heights was unexpectedly hard. When people are met with a choice to talk about themselves they were either very dissmissive, hesitant, or willing to talk. The only ones that spoke to the group and I were young men. Those young mens insigts about their neighborhoods varied and it showed to large spectrum of people that live in the neighborhood called jackson heights. 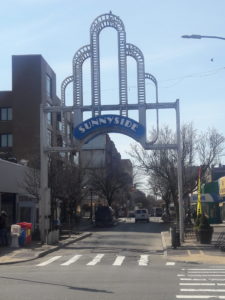 This picture was taken at 46st-bliss st by the 7 train. This sign is in english. The sign says sunny side which is a small strip mall type area and the sign was put up in 1984.

My name is Malique Mitchell and I have been a Liberal Arts student at LaGaurdia for 2 years. My linguistic background goes only as far as a basic new yorker accent. When I was younger I lived in St.Croix where I had an accent but that was 15 years ago.  Now I have no accent nor do I speak another language.